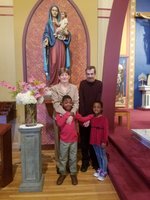 Matthew Edward Orme April 6, 1960*January 9, 2020 A man of unconditional love, Matthew Edward Orme passed away peacefully at home on January 9, 2020 as a result of ALS. He was 59. Born in Long Beach, California to parents Jerry and Mary Orme he was the fourth of five siblings. His life was filled with fun, hard work and an unselfish attitude towards helping others, growing up in a rural Los Alamitos, located in Southern California, he developed an interest in the life of quarter horses. His knowledge and compassion for these beautiful, large, feisty creatures was extensive. He developed a special tool used to clean horses’ teeth that made a hard job easier. For years Matt cared for and transported these animals up and down the California circuit as well as out to the other states where they raced. Several million-dollar horses were entrusted to him. lt was during these travels that he discovered the great Pacific Northwest. He eventually turned his Class A driver license into a steady job driving large semis, some with 3 trailers, many times on snow and ice. During that time, he drove for Viking Freight and dB Hunt. Matthew purchased some acreage with a house and barn up on the Bear Prairie section of Washougal, Washington in 1993. Years were spent on upkeep of that property, all done after work and on weekends. His plan was to keep the forest intact without letting it overtake the house & living areas. It was up there above the snow line that he met his future bride Carrie Lynn Wilmoth. They worked together from that point in making the entire place a home. Along came a son named Ian James, then a daughter they named Crystal Lynn. Their little family was then complete. Together they went into town where they took part in church, began school, had medical and hair appointments, as well as karate and children's activities. Matt and Carrie poured themselves into raising Crystal and Ian. Things continued at that pace for several years until Matt began to notice something just wasn't quite right with his arm. He drove the trucks for another year until being given the ALS diagnosis. Things began to go downhill rapidly. It became apparent that life would be easier if they lived down into the heart of Washougal/Camas where all necessities were located as Matt was soon to lose his driving ability and his body was consumed by the dreadful disease. It's been just about two years since the big move down the hill to the Columbia River. Matthew leaves behind his wife Carrie, his children Ian and Crystal, his siblings Serena, Jerome, Yvonne & Daniel, Carrie's sister Christy and her husband Chris. Also missing Uncle Matt are nephews and nieces Drew, Sarah, Stephen, Adam, Stephanie Tommy, Dwayne, Erica Daniel Christopher, Monique, David, Wyatt, Jacob, Aiden, Michael, Brandon, Emersyn, Landon, Harper, Hunter} Shelby, Waylon, Odin & Alahna. Matt was everyone's favorite uncle, but little four-year-old Amanda, with whom he had a special bond, has waited 26 years to greet him at the gates of Heaven. Services will be held on Friday, January 17th at 3:00pm at the St. Thomas Aquinas Catholic Church located at 324 NE Oak St. J Camas, Washington 98607.