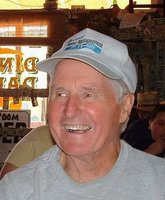 Floyd Norman McCreary, 90, of Washougal, Washington, passed away on Wednesday, July 15, 2020 with his family by his side. He was a current resident for the past 28 years in Washougal, Washington. Floyd was born to William T. and Ethel B. (Huit) McCreary on August 13, 1929 in Star, Idaho. He worked in the Electronic Industry as a Electronics Technician. Floyd joined the United States Navy and proudly served for 22 years 6 months in the Korean conflict and The Vietnam War. He belonged to V.F.W. Post #4278 in Camas, Washington and the Navy Fleet Reserve. He enjoyed being known as Mr. Fix-it. He enjoyed being a private pilot, water skiing, RV traveling and he was a dog lover. Floyd is survived by his wife, Sharon Gallagher of Washougal, Washington; daughter, Deborah (Robin) Sinclair of Happy Valley, Oregon; sister, Bonnie McNichols of Lowell, Oregon; 3 grandchildren and 2 great-grandchildren. Floyd was preceded in death by his parents and 3 brothers. Floyd will be laid to rest on Tuesday, July 21, 2020 at 11:30 AM at Willamette National Cemetery in Portland, Oregon with full Military Honors in a private family service. The viewing /visitation will be on Monday, July 20th from 10-5 pm at Brown's Funeral Home in Camas, Washington. Arrangements have been entrusted to Brown's Funeral Home in Camas, Washington. Online condolences may be expressed to the family at www.brownsfh@yahoo.com.