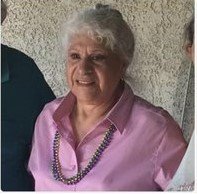 Trinie Padilla, 85, passed away on Monday, July 20, 2020 at her home. She was a current resident for 16 years in Washougal, Washington. Trinie was born to Angel and Josephine (Gutierrez) Arellano on January 6, 1935 in Torrance, California. She was a Foreman in the Electronics Industry. She was a member of St. Thomas Aquinas Catholic Church in Camas, Washington. Trinie is survived by her husband, Ray at home; sons, Daniel (Toni) Padilla of Carson, California, Robert (Linda) Padilla of Washougal, Washington; daughter, Joanne Peck of Las Vegas, Nevada; brothers, Angel Arellano of Arizona, Daniel Arellano of Torrance, California; sister, Dora Camou of Torrance, California and 12 grandchildren. Trinie was preceded in death by her parents and 2 sisters. Trinie will be laid to rest at All Souls Cemetery in Long Beach, California. Arrangements have been entrusted to Brown's Funeral Home in Camas, Washington. To sign Trinie's guest book, visit www.brownsfh@yahoo.com.