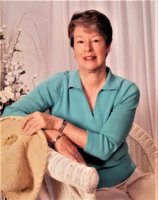 Donna Jean Cherry (Cousineau) Well mom, Alzheimer's took you away from us on 10/12/2020. It robbed all of us many years of laughing, joking and just having a good time with you. As the tears run down my face writing this, I am not only sad and heartbroken, I am angry about it too. I know you would not want me to live this way so I will try to get past it by telling everyone how you lived your life and would want us to live ours. You were born on December 30th, 1943 in Chicago, IL. As a child, I hear you were a happy, spontaneous, adventurous girl who loved to read and were a good storyteller who would entertain everyone at the Sunday family dinners. You were quite the seamstress too and created many outfits to wear. You loved to sing in choir and were proficient at the flute and piano which you played throughout high school and college. You were so wonderful four sisters followed. Poor grandpa, what did he do to deserve that?! You taught them how to ride their bikes, how to dress up in grandma's clothes, and your quiet and calming demeanor helped with the stresses of being in such a large family. In the late 1957, you all moved to Washington State. The family bounced around a bit, but finally ended up in Yakima, WA. You went to St. Paul's Elementary, and graduated from Central Catholic High School. In the early 1960's, grandpa and grandma started a successful pizza place called Pizza Pete/Mr. C's, where you worked too. You also went to Yakima Valley College during this time and got a two-year degree. Also working at the pizza place was this handsome delivery driver who swept you off your feet. In 1966 you married dad in Yakima on a Saturday, moved to Scappoose, OR the next day, and he started working at Boise Cascade in St. Helens on that Monday. Whew, talk about a whirlwind change in your life eh" You then had three children: Chad in 1967, Pat in 1969, and Teresa in 1972. We were everything to you. You always wanted the best for us, and you did anything you could to make sure we were happy, content, and safe. You were such a good cook too, and your pies were to die for. Oh how I miss your meals! You also were a devout Catholic and you took us to St. Fredericks every Sunday throughout our childhood years, and tried to instill in us to be thoughtful, kind, and unselfish. We put you through a lot as we were growing up; I am not sure how you put up with us. This is the last time I get to say this, "Thanks for bringing us into this world and not taking us out of it when you sometimes felt like it, we appreciate it". As us kids got into our teens, you went back to school to become an LPN. You worked at a hospital in Longview and a few other places for several years, eventually retiring from that to do a little traveling. You even went to Jerusalem to serve the people as a nurse a couple of times until it got too dangerous. We were impressed that you would put your life in jeopardy for others you did not know. You loved to go hiking around the Northwest, and we had some good ones together. You always had to tell us to slow down and enjoy the hike, this isn't some race we had to win. When you got Alzheimer's it slowed you down a bit, but it didn't break your spirit. At the memory facility you were quite the hit when the music started playing. You would get up, start singing and try to get the other residents to get up and dance. You were even successful sometimes! You were quite the comedian there too: always telling jokes and making funny motor noises as you cruised around the place. The staff loved you there. I cannot believe you're gone. I miss you terribly mom, and I know everyone else does too. Thanks for being so good to us while you were here. You are irreplaceable to us. You are survived by your four sisters: Gail McKenzie, Alane deVilla, Liane Koester, and Renee Peck; your 3 children and Donald Cherry; two grandchildren: Kyi Wright and Ashlee McCoy, and many nieces and nephews. We will miss you very much and I hope we can all live like you did-as a kind, honest, positive, and compassionate person who put herself before others. Good bye mom.