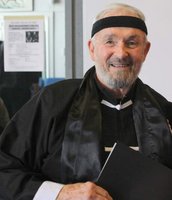 John Paul Jones III, 77 years, passed away on Saturday, May 1, 2021 at his home. He was a resident of Washougal, Washington since 1984. John was born on August 23, 1943 in Denver, Colorado to his parents, John Paul Jones, Jr. and Mildred June Wright. He worked in the Electrical Industry as a Sales Representative. He was raised in the Mormon Faith. He served in the United States Navy (Seabees), he was a member of the V.F.W. Post 7824 in Vancouver, Washington and the Vancouver Lodge #823 B.P.O.E. He loved singing and writing music and many people listened to him at various parties, especially at the Christmas time parties. His other interests were horseback riding, teaching Tha Chi training. He was a member of the Tum Pai Black Belt Ohana. John is survived by his wife, Linda at home; sons, Eric Giesler of Washougal, Washington, James (Shiloh) Jones of Haymarket, Virginia, daughters, Charlotte (Robert Lewis) Koch of Washougal, Washington, Bunnie Allen of Vancouver, Washington; sister, Gloria Webster of Vancouver, Washington; 8 grandchildren and 3 great grandchildren. John was preceded in death by his parents; brother, Frank Jones. A Celebration of Life Service is scheduled for Saturday, May 8, 2021 at 1 o'clock pm at the Church of Jesus Christ of Latter Day Saints in Washougal, Washington. Arrangements have been entrusted to Brown's Funeral Home in Camas, Washington. To send condolences to the family, please visit John's guest book at www.brownsfh.com