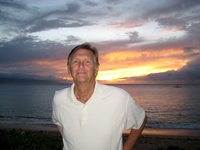 Richard John LeBlé, 72, of Camas Washington passed away surrounded by loved ones at his home on July 14, 2021 after a 17-year courageous battle with cancer. Rich was born in New York to his parents, Jacques W. LeBle and Doris F. Zoller and spent his younger years playing football, soccer and water skiing. In 1967 he attended Paul Smith’s College with an interest in restaurant hospitality and in May of 1974, he married the love of his life Loretta Rohde in Denver, Colorado. They had 2 children, Sean and Jennessa, who were his pride and joy. He started his career with Mr. Steak in 1973, moved on to work for Wendy’s International and in the 90’s achieved his dream of being a franchisee. Rich loved to travel and spent many treasured times on cruises to Europe, the Caribbean and Alaska, at his favorite spot at Napili Shores in Maui, time at his home in Sunriver, skiing in Colorado and at Mt. Bachelor in Oregon and traveling to Minnesota to spend time with his daughter. Golf, snow-skiing, boating, softball, soccer, driving his Corvette, attending Oregon Duck football games as a season ticket holder, throwing Christmas parties and being a spectator at his grandkids sporting events were all things he LOVED doing. Although Rich endured the last 17 years of cancer and in some form of pain, he never let it define him or keep him from doing the things he loved. Rich is survived by his wife, Loretta; son, Sean (Shannon) LeBlé of Vancouver, Washington; daughter, Jennessa (Bryan) Pahlen of Warroad, Minnesota; sister, Barbara Mollica of Raleigh-Durham, North Carolina and 6 grandchildren: Jordan, Cody, Jaycie, Conley, Easton & Hudson. Rich was preceded in death by his parents and several close friends. His last wish was that his family and friends do not feel sadness but celebrate his life and be happy. A Celebration of Life Service is scheduled for Sunday, August 15 @ 4 pm at the Camas Meadows Golf Club in Camas, Washington. A Graveside service is scheduled for Monday, August 16 @ 10 am at the Camas Cemetery in Camas, Washington.