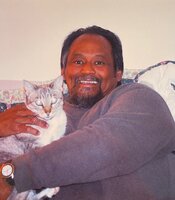 On the morning of Thursday, July 28, 2022, in Vancouver, Washington, Ignacio “Ignas” Tenorio Palomo passed away peacefully at the age of 65. Familian “Labuchu” and “Cheku”. He was born the fifth child to Roman San Miguel Palomo and Maria Tenorio Palomo on August 6, 1956, in Hagatna, Guam where he was raised through his teens. Ignas graduated from George Washington Senior High School in Guam in 1975. Shortly after graduation, he moved to Fairfield, California, and lived there most of his adult life. About ten years ago, he moved to Vancouver, Washington to be closer to family. Ignas was a free spirit who made up his own rules and lived life to the beat of his own drum. He enjoyed spending time with his family. He liked watching tv and his favorite shows were Gunsmoke, Bonanza, and Cops. Ignas also liked listening to music and his favorite artist was Santana. He loved to eat Chamorro food such as red rice, chicken kelaguen, spam, and bbq chicken. Chocolate ice cream was a sweet treat he enjoyed too. Ignas leaves behind his beloved daughter, Tiffany Nichole Mooney, and grandson, Aiden Tyler-Gage Neumann. He is survived by his sister Frances and brother-in-law Troy Haight, his sister Julia and brother-in-law Wayne Higgins, his brother Michael and sister-in-law Sheila Palomo, his sister Norma and brother-in-law Edmond Boswell, and his sister Emily and brother-in-law Kenneth Peredo. Ignas is also survived by his niece and goddaughter, Meisha Ann Haight, and many other nieces, nephews, aunts, uncles, and cousins. He was predeceased by his father Roman San Miguel Palomo, his mother Maria Tenorio Palomo, his sister Lourdes Bernadette Palomo, and his sister Anita Tenorio Palomo. Special thanks to Marchel Adult Family Home Care LLC staff and the Ray Hickey Hospice House in Vancouver, Washington. Ignas will be missed and remembered by his family and friends whose lives he touched. His daughter, Tiffany will hold a Celebration of Life in Tacoma, Washington in the coming weeks. Arrangements have been entrusted to Brown's Funeral Home in Camas, Washington. To send condolences to the family, please visit Ignacio guestbook at www.brownsfh.com