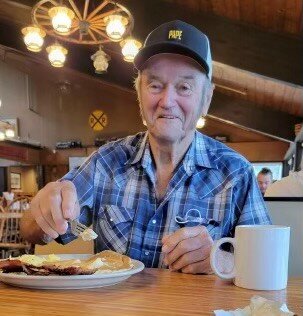 Please share a memory of Richard to include in a keepsake book for family and friends.
View Tribute Book
“Richard Robson passed away Wednesday November 9th, 2022 at the age of 88. He was born in Camas November 27th, 1933. Richard spent a lifetime living in the local area only leaving to serve his country in the US Army stationed in Germany. Richard retired as a Teamster Truck Driver in the 1980’s, driving for Rock Products and later Aphis Readymix. Richard’s life and joy was family and farming. He farmed his entire life, growing hay and raising, buying, and selling cattle. He is preceded in death by wife JoAnn Carroll, brother Maurice Robson and brother James (Jim) Robson. He is survived by caring family: sisters, Ruby (Donald) Stauffer and Marietta Schreiner, both of Washougal. Son James (JR) Robson. Stepsons David Woodard, Steve Carroll, and Tom Carroll. Step-Daughters Carolene Carroll and Jill Carroll. A service will be held November 18th, 2022 at 1pm at Brown's Funeral Home in Camas, Washington, followed by Internment at Washougal Memorial Cemetery and then a reception at a location TBD.”
To send flowers to the family or plant a tree in memory of Richard Robson, please visit Tribute Store
Friday
18
November

Look inside to read what others have shared
Family and friends are coming together online to create a special keepsake. Every memory left on the online obituary will be automatically included in this book.
View Tribute Book
Share Your Memory of
Richard
Upload Your Memory View All Memories
Be the first to upload a memory!
Share A Memory
Send Flowers
Plant a Tree