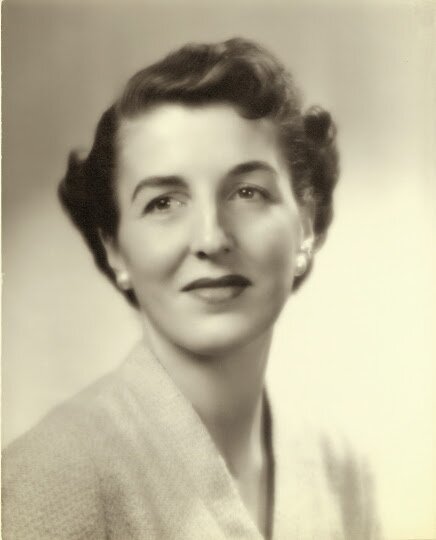 Please share a memory of Catherine to include in a keepsake book for family and friends.
View Tribute Book
Catherine A. Knapp Smith was born in Vancouver, WA and raised in Camas, WA. She was born Aug 27, 1919 and passed July 3, 2022, she was 102 years old. Her parents were Claude and Winnifred Fike Knapp. She was part of the fourth generation of the Knapp family in Clark County. While in high school, she enjoyed tap dancing and always wanted to work in the fashion industry. She graduated from Camas High School in 1937 and went on to business college. She worked in the Vancouver shipyards and in 1944 left for San Francisco to pursue her dream in the fashion industry, landing jobs at I. Magnin & eventually Charles F. Berg in Portland. Her fashion career spanned decades and one of her proudest moments was serving on 17 Magazine’s fashion buyer’s board. While she was still in San Francisco, she met & married her husband, Major Linton B. Smith. His Army career allowed her to travel to and live in Germany for a time. Their daughter, Judy, was born while they were stationed in Germany. When her husband retired from the Army, the family returned to Camas to settle down. She loved animals and always had at least one pet, sometimes more if her daughter had any say in the matter. She is survived by her Grand Dog Gracie and Grand Kitty Lily. She was preceded in death by her husband, Linton and brothers, Donald F. Knapp & Hugh A. Knapp. Survivors include her daughter, Judy Smith, nieces Claudia Knapp, Mary Mayberry, Deborah Knapp-Eddy & Libby Knapp, nephew Roger Knapp, and cousins Deborah Patton & Melinda Yazolino. At her request there will be no formal service, she will be interred at the Camas Cemetery. Arrangements have been entrusted to Brown's Funeral Home in Camas, Washington. To send condolences to the family, please visit Catherine's guest book at www.brownsfh.com
To plant a beautiful memorial tree in memory of Catherine Smith, please visit our Tree Store

Look inside to read what others have shared
Family and friends are coming together online to create a special keepsake. Every memory left on the online obituary will be automatically included in this book.
View Tribute Book
Services for Catherine Smith
There are no events scheduled. You can still show your support by planting a tree in memory of Catherine Smith.
Plant a tree in memory of Catherine
Share Your Memory of
Catherine
Upload Your Memory View All Memories
Be the first to upload a memory!
Share A Memory
Plant a Tree