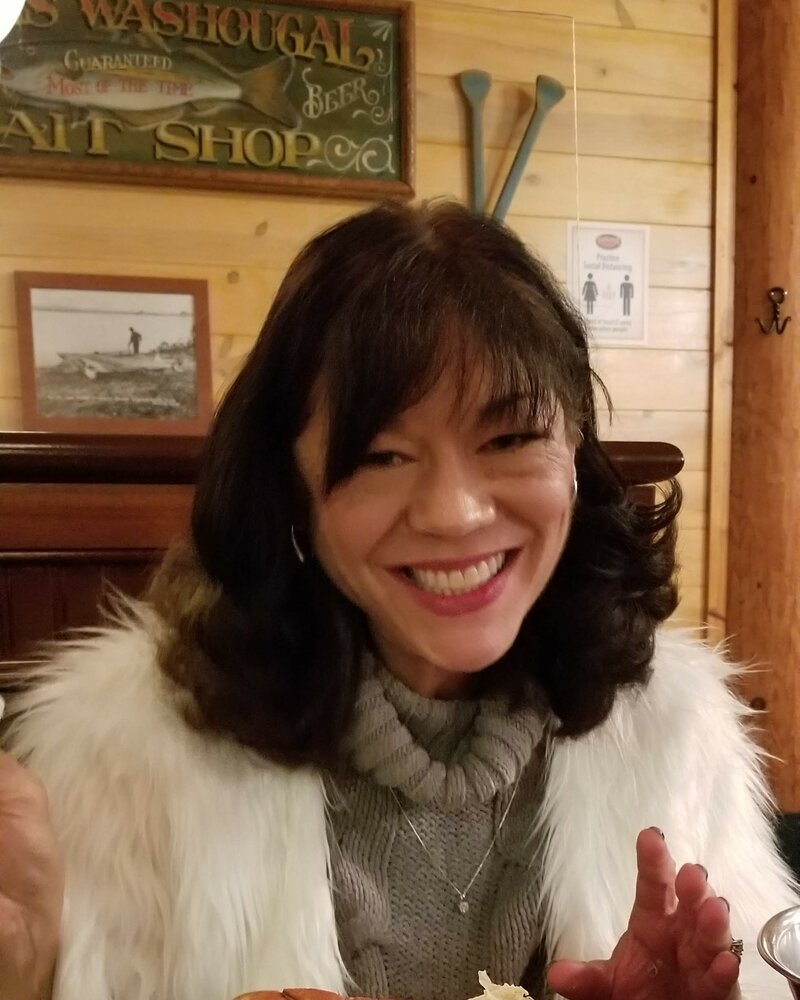 Please share a memory of Judith to include in a keepsake book for family and friends.
View Tribute Book
Judith Ann Veselka, 58, of Washougal, WA was called home to God at 5:30am on Wednesday, July 27, 2022 with her loving husband, Billy, and their five sons by her side. Judy was born on July 6, 1964 in Colorado Springs, CO, the third child of William Ray and Debra (Sei) Van Volkenburg. Her father was serving with the U.S. Air Force at that time, while her mother was busy raising her two brothers, Kevin and Terry. Judy was welcomed into the family and was so loved that it was said that her two brothers fought over who would get to take care of her. That love continued to be shown throughout her life, not only by her brothers and family members, but by all who knew her, as Judy was known to have “never met a stranger”. Judy spent most of her childhood on the Island of Oahu, Hawaii where her father continued his career in the Air Force, stationed at Hickam Air Force Base. Judy attended Nimitz Middle School there and developed a lifetime love for all the beauty and culture the islands had to offer. At the age of thirteen, the family relocated to Kelly Air Force Base in San Antonio, TX, and Judy attended Churchill High School where she was a member of the Lancer Dancers. Judy also loved and trained for years in Ballet, which brought her much pride and discipline. Following graduation from high school, Judy enrolled at the University of Texas at Austin, with a goal of obtaining a pharmaceutical degree. After college, Judy’s interests changed to the world of investments, and she became a highly successful Financial Planner with Wells Fargo Bank; U.S. Bank; and McDonald Investments, all located in Denver, CO. Judy enjoyed traveling, scuba diving, and relaxing on sandy beaches. She was also known as a great cook and she enjoyed the study and preparation of all types of the world’s cuisine. Her favorite TV shows were HGTV and Food Network, which seemed to be always on in her home. During 2002, while on a vacation in Cancun, Mexico with her business partner, Laurie (Veselka) Givens, she was introduced to Laurie’s brother, Billy Veselka. At that time, Billy was a single parent of four young boys, Jon, Jason, Jeremy and Justin, and they lived in New Braunfels, Texas. Judy was living in Highlands Ranch, CO at that time. Their romance continued and Billy made a career change to Reno, NV where they were married. Judy gave up her successful business career to become the loving mother to Billy’s four sons. On June 17, 2003, Billy and Judy welcomed their son, Joshua as the fifth son in their world. Billy made another career change in 2006 that brought the family to Washington state. Judy and the five boys lived in hotels for some time until Judy found a house near Washougal, WA. Judy loved the family life and seeing the boys grow and follow their dreams. She enjoyed watching them at baseball, soccer and wrestling matches, and she always looked forward to the holidays and family gatherings. Today, Joshua is 19 years old and is just starting out in life; and his brothers are all successful young men; great fathers and husbands; and three have served this nation in the Army. The brothers are all great friends and work together to help one another. Much of their success can be attributed to the love, encouragement, sense of values and stability that Judy brought to the family. Judy will be forever missed. She is preceded in death by her mother and father, and is survived by her husband, Billy, five sons, two brothers and seven grandchildren. Arrangements have been entrusted to Brown's Funeral Home in Camas, Washington. To send condolences to the family, please visit Judy's guest book at www.brownsfh.com
To plant a beautiful memorial tree in memory of Judith Veselka, please visit our Tree Store

Look inside to read what others have shared
Family and friends are coming together online to create a special keepsake. Every memory left on the online obituary will be automatically included in this book.
View Tribute Book
Services for Judith Veselka
There are no events scheduled. You can still show your support by planting a tree in memory of Judith Veselka.
Plant a tree in memory of Judith
Share Your Memory of
Judith
Upload Your Memory View All Memories
Be the first to upload a memory!
Share A Memory
Plant a Tree